During a pretty quiet winter with Covid restrictions forcing us all to get into the habit of connecting with friends and family on Zoom, I watched a couple of very good on line presentations at the RAF club and thought that this was something that we could be doing here in the Austin Healey Club to get some activity going during the Lockdown. I decided to do something about it.

As a result, we had just under 60 AHC members from across the centres sign up for a series of weekly on-line Zoom presentations throughout March given by Experimental Nuclear Physicist and MG TC owner, Paul Ireland, taking material from his book “Classic Engines, Modern Fuel”. The three presentations covered “E10 fuel and Volatility”, “Suck, Squeeze, Bang, Blow” and “Cyclic Variability”. Some pretty detailed explanations and graphics helped those of us without a PhD gain a clearer understanding of what is going on underneath that cylinder head. The highlights for me included the revelation that every cycle is different in terms of fuel vapour burn and the amazing high speed camera film of the flame front inside the cylinder – a cycle that is repeated every 40ms! The presentations were each followed by a very active question and answer session that allowed many of the audience to put their detailed questions on the subject directly to Paul – many related to specific problems on members cars which were all diagnosed and clearly explained by Paul’s terrific understanding of the subject.

We were also joined by John Turney from the Golden Gate AHC who keeps a eye on our website from across the pond and spotted the upcoming presentations and a couple of reps from the Triumph Register and MGCC who are keen to follow up with presentations of their own – good news travels fast!

Following the success of these three presentations the Northern Centre propose to organise a number of online presentations next winter with a selection of technical and Healey subjects to keep us occupied during the dark wet and cold evenings – keep an eye on the AHCNC website events calendar.

Many Thanks to Paul for taking the time to prepare and deliver these thoroughly entertaining presentations and as a token of our gratitude, the Northern Centre has made a donation of £100 to Paul’s charity which provides support for children’s education in Africa.

The following article is reproduced from Paul Ireland’s website with his kind permission: https://classicenginesmodernfuel.org.uk and will give readers an insight to the content of the presentations.

The UK Government is planning to introduce petrol containing 10% ethanol (alcohol) this year. This is referred to as E10. Most of what has been written on this subject does not tell the whole story, focussing on the potential damage this fuel can cause. This article aims to allay owner’s fears, especially for those with classic vehicles.

It is based on research performed at Manchester University using an engine designed in the late 1930’s. For anybody wanting to find out the full story, the results and recommendations have been published in a very readable book, Classic Engines, Modern Fuel – The Problems, the Solutions

Question - why add ethanol to petrol in the first place? Government policy to reduce carbon emissions from vehicles is the reason. The carbon in the ethanol comes from renewable sources. It is a by-product of the sugar industry. When running on E10 a petrol engine still emits the same amount of carbon into the atmosphere. However, only 90% of it comes from fossil fuel. E10 effectively reduces the carbon load by 10%.

Adding ethanol to petrol is not new. Cleveland Discol was introduced in 1928 and sold until 1968. The good news is, after 40 years of use in what are now today’s classic cars, DIscol did not appear to cause serious problems.

Modern petrol is both physically and chemically different from classic petrol. Physical differences include a lower boiling point. Chemical differences include the addition of ethanol. Both of these alter the way a classic engine runs on modern fuel.
The Manchester tests showed modern fuel increases the severity of a phenomena called Cyclic Variability. Making it worse at the RPM and throttle settings used when driving in normal traffic. 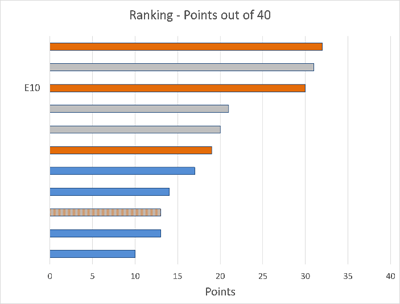 All petrol engines suffer from Cyclic Variability. It reduces power output and increases petrol consumption. Worst still, it can cause serious damage. Burning valves and pistons and destroying the big end bearings. A high level of Cyclic Variability is very damaging for an engine. Modern petrol makes this level worse. The book Classic Engines, Modern Fuel – The Problems, the Solutions describes Cyclic Variability and how an engine can be tuned to reduce its severity.

The rankings of the fuels tested at Manchester are shown on the diagram. Three of the top six best performing fuels contained ethanol (shown in orange), the other three (shown in grey) were specialist fuels. Fuels without ethanol (shown in blue) ranked poorly. The test engine ran considerably better on petrol containing ethanol as these reduced the level of Cyclic Variability.

The good news is that E10 promises to reduce potentially very expensive damage to an engine. A positive fact other articles do not make clear.

A great deal has been written about the damage ethanol can cause to fuel system components. It rots older non-metallic components such as rubber hoses, seals, diaphragms and plastic floats. Also it contains oxygen which weakens the mixture. E10 makes these problems worse.

Rotting hoses can be a serious problem, especially if they go undetected. Petrol leaks around the engine is the last thing you want. Petrol is highly flammable and leaks are a serious fire risk. Age as well as ethanol causes hoses to rot. In any case, it is worth replacing old hoses, etc. Ethanol proof replacements are now available for most vehicles.

This problem is not as bad as it would first appear. Fitting replacement hoses, etc., is a lot cheaper than rebuilding an engine!

The other problem, that ethanol contains oxygen, is something to be aware of. This causes an engine tuned to run on normal petrol to run weak. Insufficient petrol enters the cylinder. Like Cyclic Variability, weak running can cause serious damage to an engine.

Modern electronic fuel injection systems are able to adjust by themselves.

One interesting result of the Manchester tests was that petrol containing ethanol increased the engine’s power output. This is because it reduces the degree of the damaging Cyclic Variability. As a result, classic engines running on E10 will possibly deliver more MPG not less as some authors have suggested.

The bottom line is that E10 does cause some problems. As long as owners are aware, addressing them is neither difficult nor expensive.

The ugly face of ethanol blended petrol is its ability to dissolve metal. The picture below shows two samples. One a piece of steel, the other part of an aluminium float chamber. These were stored in water that had come in contact with ethanol blended petrol. Even after only 4 months, the level of corrosion is severe.

When water comes into contact with ethanol blended petrol it draws the ethanol out of the petrol making the water acidic. It is this acid that attacks the metal components. This problem is as serious with current petrol blends as it will be with E10. All it needs is a single drop of rainwater getting into the fuel system.

Is this something to worry about? Not really. As long as you are very careful not to get any water into your petrol system. Something easier said than done. Especially with older cars or motor bikes where the filling cap is on the top of the tank. Petrol filling caps or tickler pins in the carburettors can let in water. Especially if driving in heavy rain.

Unfortunately, inhibitors sold to protect against ethanol will not help in this situation. Classic Engines, Modern Fuel – The Problems, the Solutions describes some ways of avoiding this problem.

E10 is not as bad as some people make out. Older engines run better on ethanol blended petrol, reducing the expensive damage Cyclic Variability can cause. While there are some issues, they can be addressed with care and low cost solutions.Perhaps the forthcoming introduction of E10 is not so bad after all. 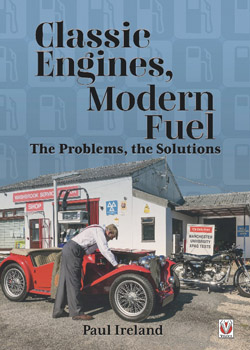 All royalties from Paul’s book will be given to charity to help educate children in the developing world.

You can order the book Classic Engines, Modern Fuel – The Problems, the Solutions at: